Our Labor Day Weekend Trip to the ER 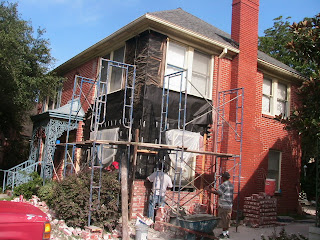 We started off the day with a new crew of brick layers...the first ones couldn't keep the brick in a straight line. We had communication issues with them. We kept talking about lining up the bricks straight with the existing brick and mortar already on the house and they kept talking about it being "level." Meaning they were laying the brick level with the earth....however, our house is not exactly level with the earth, so putting bricks on that are level, but not straight with the house, looked very very odd!


Meanwhile, after Moustapha and I went outside to examine the new brick work, we headed back inside the house. The kids had just finished breakfast and were still in their highchairs. Moustapha came in first and I was right behind him. He placed his hand in the door frame to balance himself to take off his shoes. Unfortunately, his hand was also in the hinge side of the door and when the door closed behind m 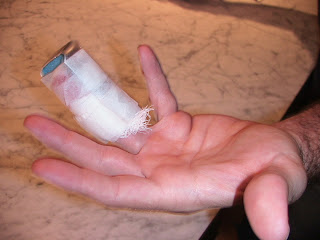 e, it closed on his finger. UGHH! It was horrible. I won't go into the gory details. But, it was bad and part of his finger remained in the door....We rushed him to the Emergency Room. Thankfully there was no wait for him and they got him right in. They were able to stitch his finger back together, but we won't know the prognosis until we meet with a plastic surgeon on Tuesday. It is unlikely that the portion that was stitched on will take, but we are hopeful and praying for healing. Hoping for some better days....
Posted by El Momma at 8:53 AM
Email ThisBlogThis!Share to TwitterShare to FacebookShare to Pinterest