Bakri's Last Baseball game of the Season and His First Base hit! 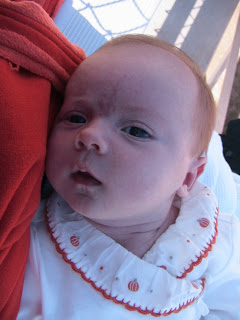 Saturday, Bakri and James had their last t-ball game of the fall season. T-ball? Yes, t-ball. I know, they are 3, but the league by Michael and Patricia's house allows children to play in the fall if they are going to be 4 years old by April 2009. Bakri barely makes the cut, but he made it. And he really wanted to play baseball with his cousin. 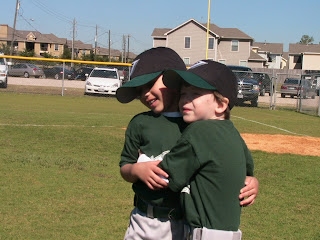 These two cousins love each other so much....now that Trinity has arrived, James may have a new favorite cousin. But, he still loves running around with his buddy, Bakri. Those boys are very close to one another. I hope they will always have a special relationship and I believe that they will. 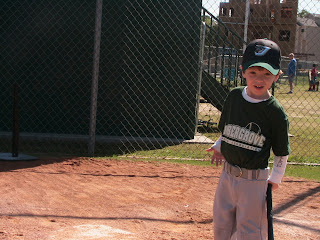 Bakri has really come a long way in his baseball skill. It was kindof a rough go at first. And, seriously, no one really expects a lot from a 3 year old. He started off the season with a great swing and hitting the ball off the tee really well. The problem was....as soon as he hit the ball....he ran really fast....in the wrong direction! Sometimes it was to 3rd base and sometimes it was to 2nd and sometimes it was to the pitcher's mound. He definitely ran fast...I mean, he would dash off in the wrong direction while everyone is screaming..."run to first base!" Which meant nothing to him until he figured out where first base was! 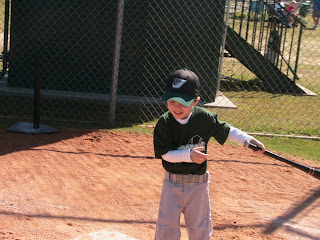 Then, he learned where first base was, but he lost his swing. I know, how does a 3 year old have a swing and then how does he lose it? I think it was just the fact that he wanted to run the right way so badly that he just forgot to swing and some of the games it was difficult to even get him to swing. 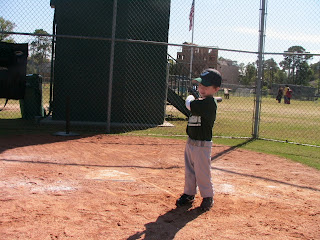 But, on Saturday we reached the final game of the season. And it was the 3rd inning and Bakri was finally up to bat. He was 3rd in the batting order that inning. There were 2 boys on base with no outs. So, he had a good shot of getting on base and maybe even bringing in a run or at least advancing the runners if he could get a hit.
And, he did! He hit the ball off the tee and got a base hit...and he ran to first base! It was very exciting and a huge difference from the start of the season. WAY TO GO BAKRI! 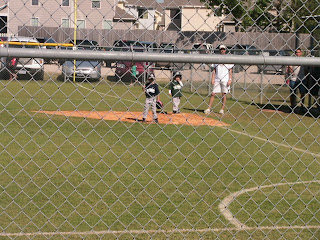 Here he is on first base! Yeah, Bakri! 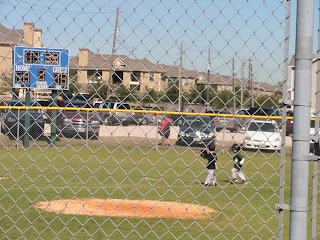 Here is Bakri running to second base...the player after him got a base hit too, so round the bases here we come! 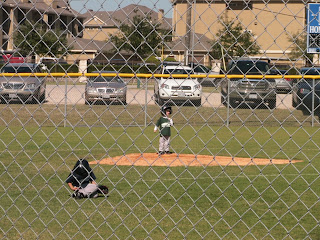 Here is Bakri on 2nd Base! When Bakri was on second base, his cousin, James had a base hit that advanced Bakri to 3rd Base. 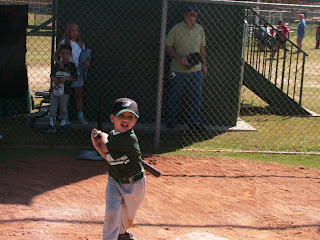 James Cullen gets a base hit in the 3rd inning and Bakri runs to 3rd base! 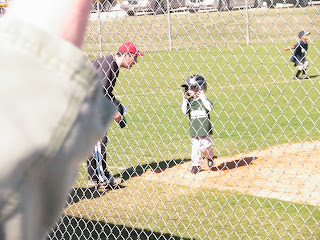 Run, Bakri, Run! Moustapha was there to give him a high-five! 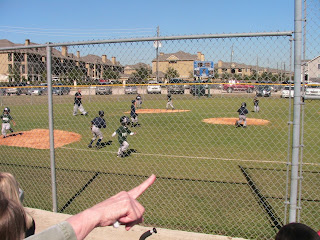 Bakri is headed home!!!! He got his first hit, and his first run scored all in the same game! What a way to finish...it was very exciting.... 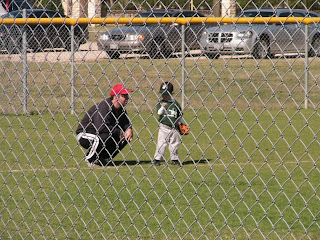 Here he is "baseball ready" in the outfield...it is really funny to see these kids when there are distractions that we can't do anything about. Sometimes you can hear a train. One Saturday there was a blimp. Another time there was a helicopter. And one by one, they all notice and have to let their parents and friends know. It is hilarious. They are also really into the coolers of water in the dugout. That gets a little out of control as they start pouring water everywhere. 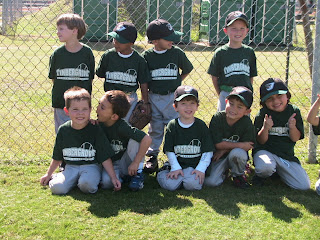 Here is Bakri's first baseball team. All of the kids are 5 and under. 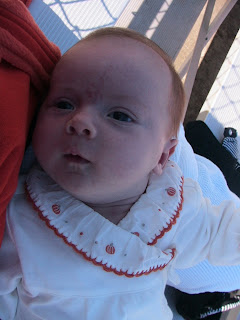 Trinity enjoyed her morning at the baseball game too! She is one month old in this photo.

Bakri's on track to be a future astro! That is precious to see him running the bases. Your kids are beautiful and very blessed to have such wonderful parents. I love checking your blog just to see what is next. Lots of love.
Kym

I love checking your blog and keeping up with your family. Glad everything is going so well for you guys! Thank you for calling on my birthday....what a great memory you have! Love, Marsha