Life is good around here. I'm not kidding myself- I know that times have been hard for us...we've been without a working kitchen for nearly a year! And living in the middle of an unplanned remodel for most of that time. But, we have a beautiful angel of a daughter and the best boys in the world. So, what is there to complain about?? We are immensely blessed. 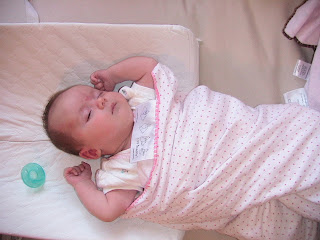 Trinity is getting SO BIG! Here she is relaxing with one eye open! She doesn't want to miss any of the action around here. She will be 8 weeks old on Sunday. I really can't believe how much faster the time seems to go by with each child. She has been sleeping through the night for nearly a month and has been wearing size 3-6 months for nearly as long. She'll visit her pediatrician this week for her first set of shots. I expect she'll get a great report otherwise. She seems to be growing like a weed! 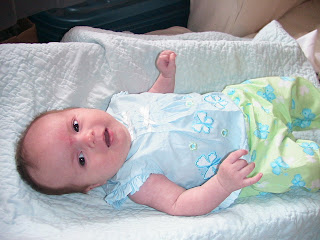 Here she is sporting a "hand me down" from her favorite girl cousin- ATHENA! This outfit looked brand new. Of course, we made a mess in it! We tend to do that. Oh well! I still got her photo in it before I had to change her. Speaking of her favorite girl cousin- that is because she is her only girl cousin so far! We find out this week if Michael and Patricia's new baby will be a boy or a girl. As of now, there are 6 boys and 2 girls on the El-Hakam side and 4 boys and 1 girl on the Maddux side. So, we'll either have a Maddux basketball team with 5 boys or Trinity will have a girlfriend her age! Either way, we are very excited about the newest Maddux baby. He or she is due to arrive in early May! 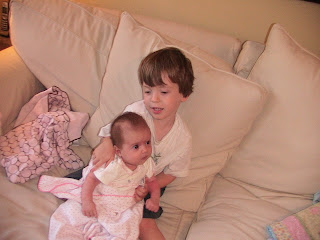 Bakri is getting better and better at helping with Trinity. I think he is trying to burp her in this picture. He loves her so much! The difference between 3 and 4 seems to be huge. I am seeing so many changes in Bakri this year. We've always heard about the terrible 2s and we are learning more about those with Maddux (at least with the fits he throws) than we did with Bakri. With Bakri, 3 has been more challenging. But, now as he gets a little older- we notice him listening more, talking more and asking "why?" And when he asks "why," he really wants to know. It kind of makes the parent have to think about the answer and decide if it's important. It is really an interesting stage of development. Reasoning with our son is becoming easier. He is great at sitting at the table, eating with his fork and then asking to be excused from the table before washing his hands. This has been quite a treat for all of us and Maddux has followed suit. He now sits at the table with Bakri, eats with a fork or spoon and asks "may I be excused from the table?" before he gets up. Maddux usually answers to by saying "yes, you may!" :-) I sometimes think that Bakri growing up, forces Maddux to grow up faster than he would otherwise. I guess it's related to having a big brother close in age. He wants to do everything Bakri does. 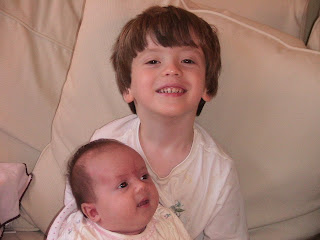 Bakri really enjoys his school- PoeCo. I sometimes have a difficult time convincing him that it is time to leave the playground. He does like to check on Trinity or as he sometimes calls her "baby sister." He is the puzzle master. The child is seriously advanced at puzzles. Right now he has 4 wooden puzzles- each with 50 pieces. All of which he can put together very quickly and he will do it over and over again. He definitely needs more puzzles. I'm afraid he'll be bored of his puzzles soon. 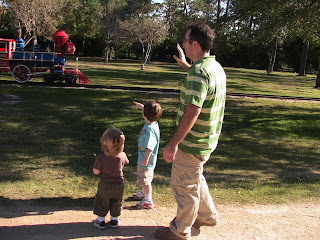 After church on Sunday we went with some friends to Hermann Park for a picnic lunch. The boys love the train at Hermann Park so much! We live very close by. So, we rode the train on the last day before the old train closed and have really enjoyed the new train. It is SO MUCH BETTER than the old train. The new ride around the park takes about 10 minutes. They are also building a new train station and there will be a couple of additional stops around the park. I think it is scheduled to be complete in March. Maybe we'll have Bakri's birthday party at the zoo. It would be fun to ride the train around and visit the carousel. First, we have Maddux's birthday to plan. We plan to have a small party at home...depending on our house being ready! 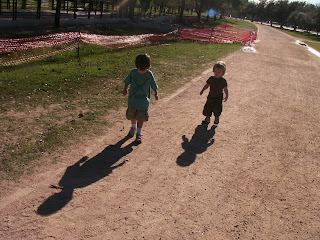 One of the great things about our visit to the park last Sunday was the discovery of Maddux and Bakri's shadows. I love this picture! My little boys are growing up so fast. I can't believe Maddux is already turning 2. He is such an amazing little boy. We went to a music class at St. Andrews Fine Arts School on Thursday and Maddux was such a star. At first he was hesitant, but it didn't take long for him to warm up. He ended up being a very active participant. He tried everything and was really great at keeping rhythm. It is probably attributed to the drum set in our living room, piano in the den and guitars we keep in the red wagon. I told his teacher that we could probably host a music class at our own house! We have all of the supplies. In fact we also have a keyboard in the den. The kids have figured out how to get it to play jingle bells. It is this really upbeat version of jingle bells with a jazzy intro. They love to make it play and sing along.

I am really excited to start this week. Painters are scheduled to start on Tuesday. So, if everything works out, our house will be like new very soon. I can't wait! Lots of love to you all!
Posted by El Momma at 11:08 AM
Email ThisBlogThis!Share to TwitterShare to FacebookShare to Pinterest
Labels: busy day, home, parties

Such a sweet fam! I have been watching two extra kids this week...so I have had 3 age 3 and under around here...girl, you are busy! Can't believe Trinity is already 8 weeks old! Let us know if y'all make it to Austin anytime. We would love to get the kids together!