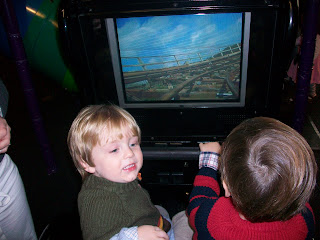 Maddux and Bakri took 10 rides on these pretend roller coasters. It's not nearly the same as the real deal. But, they liked them a lot. 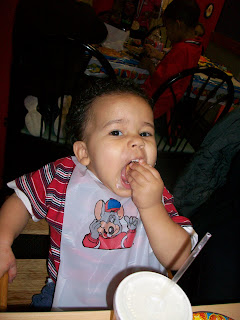 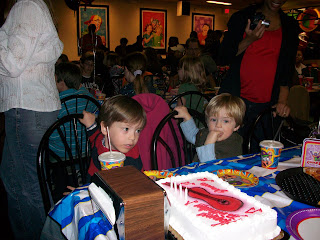 Yes, Maddux has his hand in his mouth in this picture. And yes, there is clearly cake icing missing from his side of the cake. What can you expect when you put a cake so close to a 2 year old?...he only has so much restraint! 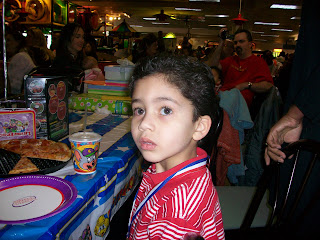 James on his 4th birthday. The whole family was feeling a little under the weather that day. Michael was really sick that week and my dad found out a few days later that he was suffering from pneumonia. Luckily, everyone is doing much better now. 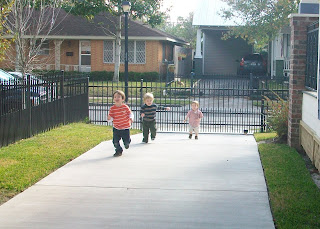 My dear friend, Holly came to town with her son, Owen. And we met up at another friend of ours- Jordan's home. My boys and Holly's little boy are like a stairstep. Each one a little bit smaller than the next. And they had the best time together, just running up and down the driveway. Luckily noone got hurt. They only collided a couple of times! :-) Boys will be boys. I wish we could all hang out a lot more. But, when you don't live in the same city or state, you take what you can get.

Jordan also has a baby boy. But, he is too little to run on the driveway just yet. Speaking of, last night I was asking Bakri about a boy from his school I mentioned the child's name and he said no- not him, Baby (blank- I don't want to put his name and offend the older one!) But, it was interesting that he knew just how to differentiate and let me know which child of the same name that he wanted to spend time with- and it was Baby. So, I guess we need another playdate at Jordan's soon! 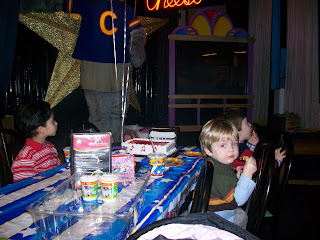 We celebrated our nephew's 4th birthday last month. He and Bakri are just a couple of months a part in age. And they get along great. They love a lot of the same things- music, baseball, the astros and Chuck E. Cheese. This was a Chuck E. Cheese party with a guitar birthday cake. Fun! 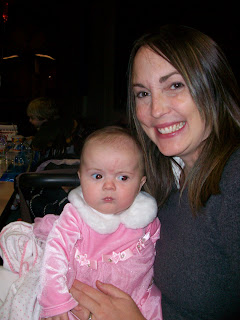 Trinity was sporting a holiday party dress for the occasion. She likes to dress up! 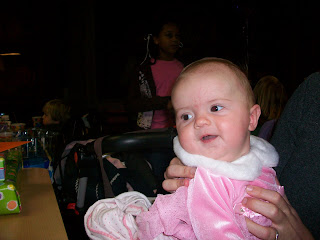