In June of 2007, Maddux was 7 months old. One afternoon, we went to Jason's Deli with my parents and sister. While we were there, there was a man with a very fancy camera sitting close by with 2 friends. He was watching Maddux closely and soon a friend approached and asked us if he could take Maddux's picture. He explained that he was in America from China. He was a master watercolorist and had an exhibit in the museum district. They handed us a card and we agreed that he could take photos of Maddux - in Jason's Deli. He even invited us to his watercolor exhibit and we went later that week. It was the most beautiful watercolor work I had ever seen. The details were simply amazing. I had hopes that one day he would paint a beautiful watercolor of Maddux and that I would somehow discover it on his website. Well, today was the day. Randomly, I went to his website, clicked on 2008 and there was a painting called "Love of Grandson." This is the one! Perhaps we'll be able to get a print of it someday. It is just so beautiful and captures our sweet baby Maddux and the love of his Grandfather perfectly. I just love it. 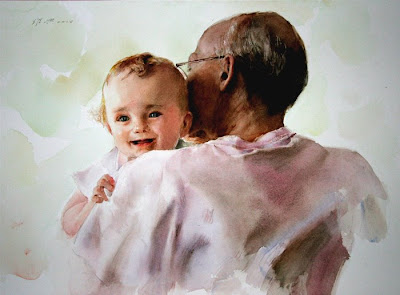 we definitely need to get together next time i come into town. harrison needs to meet his girlfriend. does she go for bald guys? :)

That is a beautiful painting and great story!