Bakri and Elizabeth- The Flashlight 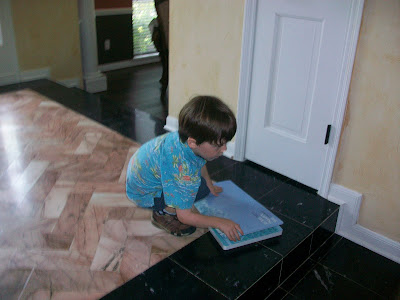 Bakri stayed the night with my parents last night. And my mom emailed me this story this morning. I thought it was so cute, that I didn't want to forget it and I'm sharing it with you.
When Bakri went to bed last night he asked my mom to get the flashlight- she needs it to get around in the dark. :-) Anyway, she must have named it once and so he asked "what's the flashlight's name?" and my mom couldn't remember. This is the rest of the story as told by Bakri's Grandmother:

"Bakri is still asleep. He went to sleep right after we went to bed. Bekah, he is so smart. I let him point the flashlight on the ceiling after I went in there. It actually looks like a face of a woman when it projects. Anyway, I told you I couldn't remember the name I gave the "flashlight lady" so as he was shining the light on the ceiling he said "Elizabeth" "Elizabeth the Queen". That's it! I called her Queen Elizabeth and he called her Elizabeth the Queen. I said "Bakri, you are so smart". He smiled and said "Thank you". He is so precious."
Posted by El Momma at 8:03 AM
Email ThisBlogThis!Share to TwitterShare to FacebookShare to Pinterest
Labels: bakri, grandparents, smart, visit

soo sweet. Kids remember some of the most random things for sure!!