Updated Pictures of Our Kitchen Remodel

As most of you know, our home was built in 1928. And when we bought it, it pretty much had the original kitchen (or at least a kitchen that had not been updated in a really long time.) In early 2008 we encountered a leak which flooded the kitchen and forced us to make a decision- either patch up the problem with the old galvanized steel plumbing or fix the problem long term. We opted for new copper plumbing and a brand new kitchen.

In the 60s the previous owners (who raised their large family in this house and lived here for 50 years) added on to the home. They added a den and an upstairs bedroom and a second stairwell. It is really a great addition to the home. However, they added directly on to the back of the house, without ever removing the back wall including the brick. The pictures below show what the kitchen looked like before. It had the original kitchen window which looked into our den. Check it out! Our remodel is nearly complete- only a few minor touches remain.

The picture below is of the before kitchen looking into the den. You can see the fan in the window and the back windows in the den if you look carefully. We removed this wall. 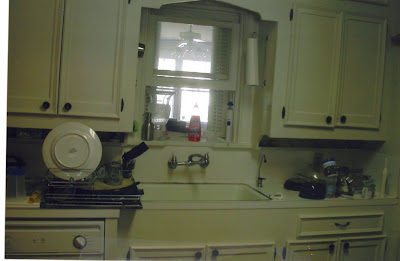 The picture below is the same view of our kitchen now. We removed the wall and added support columns. Moustapha and I designed this kitchen ourselves. We love it! 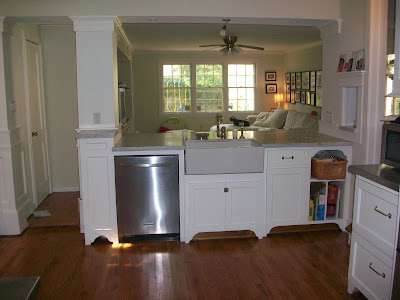 This was the back corner of our kitchen before. It had a hot water heater in the corner of the kitchen. It was awful. There was absolutely no storage space in the before kitchen. 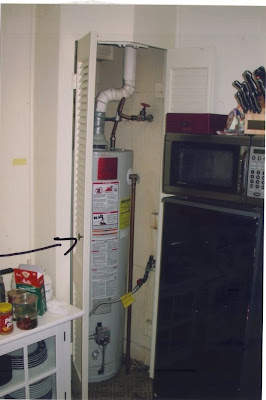 And now....this is the same corner! We have storage above the refrigerator. And, a pantry on the right side. 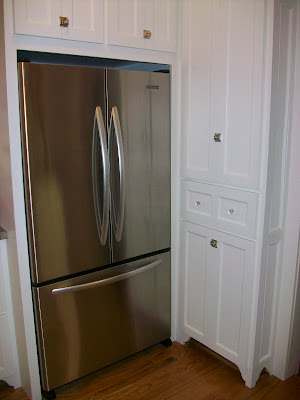 Here is another view looking into the den. The original house had a telephone cubby built in as you went up the stairs. We left that and opened it to the kitchen. You can see it on the right of the picture. 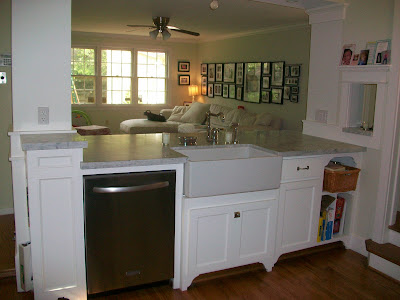 Here's a view of the kitchen from the den. Two things that need to be finished in the picture are the rangehood- it is going to be wrapped in stainless steel. And there is currently a microwave on the left counter. That microwave fits in the cabinet below. We are just waiting on a piece from the stainless steel fabricator, so we can move the microwave off the countertop. 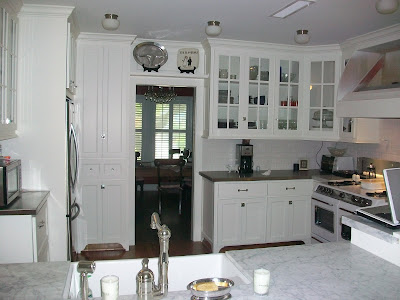 This last picture shows another view of the kitchen. In the before kitchen, we had a bathroom where this window is. We were able to relocate the bathroom under the second stairwell. And we put in a beautiful new window. Our O'Keefe and Merritt stove still works wonderfully and Moustapha is nearly finished restoring it. I'll post more pictures when the kitchen is complete. Thanks for checking it out! 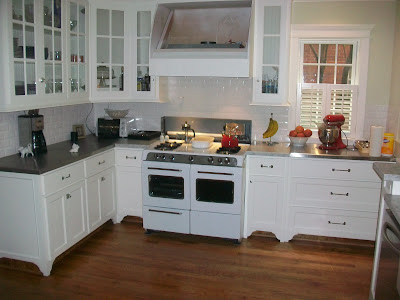 Posted by El Momma at 2:59 PM
Email ThisBlogThis!Share to TwitterShare to FacebookShare to Pinterest
Labels: kitchen, our house, remodel

The cabinets are sooo pretty and I love the windows with the cue shutters.

I had NO idea you were a designer ... what a GREAT job, it is fabulous! I love the cabinets!