Our Trip to the plastic surgeon

Here is a picture of our sweet little boy, Maddux on Labor day. So, technically, this is his "before the slide accident" photo.

On the following day, Maddux went to Mother's Day Out. It was his third day. I got a call 25 minutes after leaving him as school. The voice on the other line said "Maddux hit..." Right then, I was afraid Maddux had hit someone. And for a moment I was mortified. Not that my child would hit someone. Obviously, I don't want him hitting other children. But, I know that happens. But, I pray I never get a call that my child has injured another. So, let's go back to that phone call "Maddux hit his eye on the edge of the slide and we thought you should come look at it." I was out the door so fast. It was the longest 5 minute car ride ever. I was just nervous about knowing the right thing to do. I began praying that God would give me wisdom to know what to do. 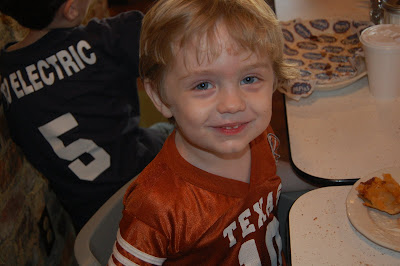 Maddux wasn't even crying when I went to pick him up. The bleeding had stopped, but he did not look good. The cut was on the bone below his eyebrow and it was very open. I took him to the pediatrician so I could get a recommendation from his doctor. He recommended we take him to a plastic surgeon. He feared that the ER doctors would want to stitch him up and that he would have a larger scar than necessary. 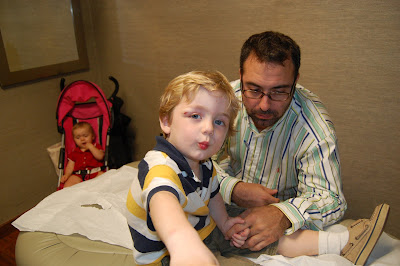 I was at the pediatrician's office waiting as Nurse Kimberly made calls to try and find a plastic surgeon that could see Maddux and stitch him up. Suddenly, I remembered visiting a plastic surgeon's office in the same building just before Trinity was born, when Moustapha had his accident with his finger. I called Moustapha and asked him to call. Luckily, he was available to see Maddux. 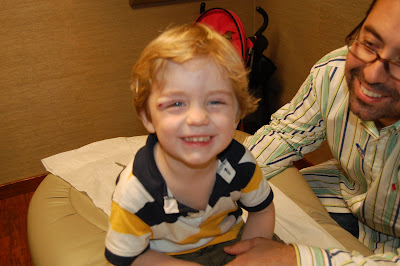 Maddux had to get 6 stitches. To say they were beautiful stitches is putting it mildly. They were gorgeous stitches! Maddux had a hard time during the numbing shot, but he was great when the stitches went in. What a trooper! 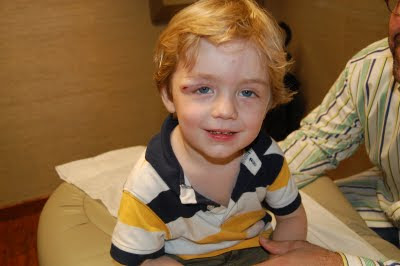 Here he is feeling a little tired from such a big day! I'll take a picture of him soon and add it as well. You can't even tell he had any stitches. Yeah for Maddux and for his great doctor!