If your teenage self or even college self were to run into you now, would she/he be surprised at how much you've changed?

I realized something about myself this week. I was put in a situation that left me feeling vulnerable, so speaking to the parties first, I composed an email summarizing events that had taken us to this point. I thought I was thoughtful and careful in my words. I even asked the husband to read it over before hitting send. All was well, so I thought. What I discovered in the response that I received was that I am a direct person. Let me say this again, I am a direct person. How did I not know this? I wasn't always so direct. In fact, I remember having so much anxiety over things that convicted me that I did nothing about and it ate me up inside. I'm not like that anymore. My teenage self would be more than surprised to know me now. We are so different. Yes, I am still the same person. But, the fear and anxiety that used to keep me from speaking up, mostly isn't there anymore. The convictions have grown stronger. And, I've learned that being honest and more straight forward gives me much more peace than trying to hide those feelings and keep them bottled up.

When I was told that I was a direct person, it was by someone who loves me and cares about me. It wasn't a dig. I was just surprised. As I've been able to reflect on this during the week, I am thankful to be a direct person. Someone who speaks her convictions, who means what she says, who is dependable and who holds those in authority accountable. There are worse things I could be, right? 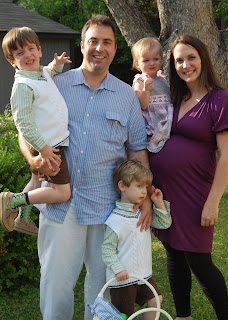 And, here we are trying to "keep it together" for an Easter photo. :-)
Posted by El Momma at 10:50 AM
Email ThisBlogThis!Share to TwitterShare to FacebookShare to Pinterest
Labels: direct, personality, stranger, who am i

Great family photo...you all look great! My high school and college self wouldn't know who I am. Sometimes that makes me sad...but most of the time I am happy about it! I miss my old carefree self, but other than that I'm pretty pleased with the new me! :) I could take some tips on being more direct. I've gotten better but still have a ways to go. Good for you, Bekah! xoxo!