How to Make New Year's Resolutions that You'll Actually Keep

My friend Jeff posted this on his facebook status and on twitter yesterday: "In 2011 I'll take life less seriously, make jokes & take lots of photos." I believe he posted this mostly in jest. I mean if you even know Jeff a little bit, you know that he already does all of these things and does them quite well and with consistency. But, his resolutions got me thinking about new year's resolutions and how we all should be so smart to make resolutions that we are sure to keep. How do we do that?

First, think about what you are good at. Is there anything that when you do it, people almost always compliment you, affirm you or ask you when you'll be doing that again? If something pops in to your mind, then you should resolve to do that more often in 2011! For me, it's song writing. I always keep myself super busy with so many other activities. In fact, in 2010, I was very involved in some important issues in our neighborhood. Some, that took up a lot of time. Maybe too much time. As much as I love our neighborhood. I am not going to resolve to spend more time on issues in the neighborhood this year. Instead, I am going to help where I am needed and do something I really love- write music. We completed work on seven songs this year and were blessed to be able to play them with the band and teach them to the congregation at our church. Many times, I was given the highest compliment I could imagine at this point in my songwriting career. And that is being told that "I love the new song you guys are doing. Who sings the new one you did today?"- meaning, who recorded it and made it famous? And, I get to say that I wrote it. That is super fun! I've even been told that some of the songs I've written are favorite songs. And, that's before they are surprised to learn that I've written them. I was telling my pastor that sometimes I feel a little strange even saying I wrote the songs that I've written. Because, I really feel that they are gifts. They really are. They are gifts and I resolve and hope to keep receiving the gift of songs in 2011! I promise to share if I do!


What is something that you do that makes you YOU? Let's talk about my friend Jeff again. He's funny. Not a comedian, necessarily, but a genuinely funny person. If I was going to describe him I would definitely include "doesn't take himself too seriously" in the description. It's funny, really. Jeff and I have been friends for over ten years now. And, I promise, I never would have thought that would have happened considering our first meeting. He drove me crazy. Constantly calling me a nickname that I hated and he pretty much seemed to obtain a lot of pleasure from driving me nuts. But, he was funny. He drove me crazy, but he was funny. And, once I got to know him, I really liked him...a lot. Now, I would say he's hilarious and super fun to be around. He's constantly smiling or making others smile and his energy is infectious. When Jeff says he's going to take life less seriously and make jokes, he's just saying that he is going to do something that he already enjoys doing and that he does well. The thing I heard about me a lot this year was how relaxed I am. I was not always like this. But, I also didn't have four kids and a totally fun life before either! So, as for me, I am going to be more relaxed in 2011. I'm going to go with the flow, be myself and embrace the chaos of my life. These are things I already do and I'm going to do better in 2011. My kids are going to keep surprising me. My house is going to almost always be a mess. There will still be a drumset in my living room. And, this momma WILL be relaxed and go with the flow in 2011!

Jeff is a photog. From the time we first met, he always took pictures of everything. He probably has a photo from that awful first meeting at the Farmer's Market! Every event, every party, every person, every detail, every thing! Now, he gets paid to take pictures. He's a professional and he's taken lots of headshot photos for up-and-coming artists and actors in Hollywood. He's turned something that he loves to do for fun into something that he can do as a career. That's amazing. And, while that works for some of us, most of us just get to have a hobby that we can do and keep doing this year. So, pick something that you love and know you will do all year long; for birthdays, events, parties and resolve to do it. Make it your "thing." Mine is hosting parties and baking. I resolve to bake more in 2011. I have four children. So, there will be at least four birthday parties, most likely at my house, this year. Plus, Leeland will be baptised this year, we'll have Easter to celebrate, Christmas, Moustapha's birthday, my birthday, holidays and I'd love to have party that we always do each year. I still haven't figured out which one that will be. I'm leaning toward an annual Christmas party. But, we're just not sure yet. But, with all of the guaranteed parties we'll have this year there is lots of opportunity to do my "thing!" I will bake cakes, cookies, cupcakes and more for these fun celebrations. Yesterday, I made cake balls for the first time. They were delicious! I will definitely find a special occasion to make these treats this year. I am thinking about eye balls for Halloween.
To conclude, my new year's resolutions are 1. to write more songs, 2. to be more relaxed and 3. to have more parties and bake a lot. In other words, I am going to be more like me in 2011. I am going to be myself and I'm going to share the things that I believe I am good at with others, which will only bring me more joy and happiness.

Looking forward to a wonderful 2011. Happy New Year, Everyone! 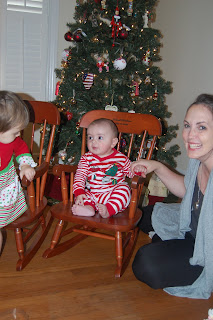 You almost left me speechless!

Many blessing and best wishes to you and your entire family for 2011.

You almost left me speechless!

Many blessing and best wishes to you and your entire family for 2011.

Hey Rebekah-just wanted to tell you how much I loved your Christmas card and your blogspot-your mom and dad did good!! It is so great to see you and Mike so happy and having so much fun with your little ones-would love you to come and bring them to see mom-she would love it too-thank you for keeping in touch-we are doing great- love ya much-Bubba "Place" Stanton