Sometimes I wonder about the "people online."
You know the ones.
The ones that are often referred to as "trolls" because they troll websites looking to cause a fight.
They aren't "us," right?
I wouldn't be friends with someone like that, would I? Or, would I?
I don't spend a lot of time reading comments on articles or youtube videos.
Just as a small example, the below is a screenshot of a YouTube of my second oldest son talking at 11 months. I've deleted the comments that call him the "r-word" or generally make a derogatory comment about a baby. But, I leave most. I often wonder who took the time to give a video of a baby (my baby) a thumbs down? But, I digress... 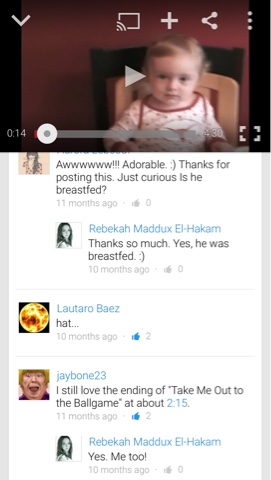 But, I have seen enough to feel as though there are a lot of mean "people online."
Does this mean there are a lot of mean people out there?
Or, are we creating online caricatures of ourselves that can say and be our worst selves?
If we really aren't that mean and these are just caricatures we are hiding behind, then it seems to be more of a sign of our brokenness than anything else.
We are so broken that we want to break others.
We want to see that they are more broken than we are.
Break them down.
Put them in a box.
Label them.
Blame them.
I read both sides.
I'm sure you do too.
I know people who blame our current president for every problem. I know others who blame our most recent past president for every problem or the president before him. And so on.
It's often "us" vs. "them."
It's rarely a "we."
We don't see ourselves as the bad guys.
Because, frankly we are just not as bad as the other guy.
At least we don't believe we are.
We certainly don't have the power of our elected officials to make change, so when they don't or they do, they are definitely worse than us.
We don't physically hurt people.
We aren't murderers.
We don't leave guns out in our homes for our young children or their friends to stumble upon.
We're not racist.
We're not sexist.
We're not that religion or that one or that one.
We're not like "them."
We're better.
Or, are we?
Just a thought.
But, it seems to me that if we are all broken, then we are all broken. Broken more? Or, broken less? Does it even matter? Broken is broken. And, by His grace we are forgiven.

Today's "think on this" comes from Romans 3:21. " But now the righteousness of God has been manifested apart from the law, although the Law and the Prophets bear witness to it— the righteousness of God through faith in Jesus Christ for all who believe. For there is no distinction:  for all have sinned and fall short of the glory of God,  and are justified by his grace as a gift, through the redemption that is in Christ Jesus,  whom God put forward as a propitiation by his blood, to be received by faith. This was to show God's righteousness, because in his divine forbearance he had passed over former sins.  It was to show his righteousness at the present time, so that he might be just and the justifier of the one who has faith in Jesus."